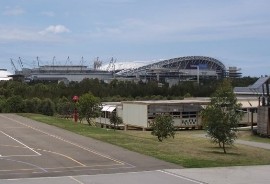 Prior to this date the school buildings and facilities had played an important role in the Sydney 2000 Olympic and Paralympic Games, as the homes of the suburb were built initially to house the athletes who competed at the Games.

The actual school buildings were used as the medical and rehabilitation centre for the athletes during their stay in the Village.

In 2001 a steering committee of ‘potential’ parents and community members, underthe leadership of inaugural principal Ms Debbie Lowe, began the task of organising the new school. This group worked on the design and colours of the uniform, the school logo and plans for the school’s opening. The school began its life on Wednesday 29 January with 55 students and 7 staff.

The suburb of Newington is designed with many environmentally friendly aspects including the use of recycled water and an electricity supply augmented from solar power generated in part from the solar panels located at the school and on residential buildings.

The school is situated adjacent to Sydney Olympic Park which includes many of the facilities built for the 2000 Olympic Games, including Stadium Australia, Superdome (both of which can be seen from the school grounds), tennis centre, Aquatic and Athletics Centres and the recreational and wildlife areas of Millenium Parklands and Bicentennial Park.

Prior to the arrival of the First Fleet in 1788 the lands along the southern shore of the Parramatta River were the traditional home of the Wangal people of the Eora nation. The river, tidal flats and mangroves provided an abundant food source for the Wangal people.

The history of the area in which Newington stands today goes back to the earliest days of the British Colony in New South Wales. The original land title of 502 hectares being granted to John Blaxland in 1807 of the land north of Haslams Creek. Blaxland built a home on the estate, which he called Newington House. Newington was the name of his family’s estate in Kent, England. Newington House still stands today. Blaxland established industry in the area along the banks of the Parramatta River, originally producing salt for the colony. He later added a flour mill, tweed mill, cattle grazing and logging.

Other activity and industry developed in the area over the years included a racecourse, boys school, hospital, abattoir, brickyards and the Newington Armoury, where the Australian Navy stored their armaments. Many of the armoury buildings survive today.

Return to top of page

We acknowledge the Wangal people of the Eora Nation, who are the Traditional Custodians of the land along the southern shore of the Parramatta River. We pay our respects to the Elders, both past and present, and to those of the future, for they hold the memories, the traditions, the cultures and the hopes of Aboriginal Australia. We must always remember that under the concrete and the asphalt upon which Newington P.S. was built, this land is, was and always will be, traditional Aboriginal land.

Copyright for this website is owned by the State of New South Wales through the Department of Education. For more information go to https://www.dec.nsw.gov.au/footer/copyright.